The Office Sustained Engineering Team has announced that Service Pack 3 (SP3) for Office 2007 & SharePoint 2007 will be coming some time during 2011 Q4.  This appears to be the last major update to the 2007 client & server stack as the team states:

“We are offering this release in preparation for the April 2012 end of mainstream support for the 2007 client and server products. The October 2011 release provides a 6-month window to test and deploy the release prior to exiting mainstream support.”

The Service Pack will be a roll-up of all prior 2007 Cumulative and Public updates since Service Pack 2 plus some new hotfixes.  As always with the SharePoint 2007 world, you will need to install the WSS update before the MOSS update.  There is not a planned or expected CU requirement following the SP3 installation.

To quote the article directly:

“SP3 will include changes in the following areas: 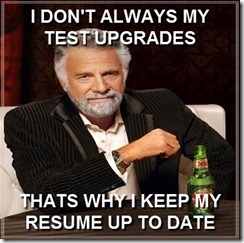 As always, please plan to test your upgrade plan in your Development/Test/QA environment prior to ever consider installing in Production.

Keep in mind that if you only have a Production environment, you really only have a testing environment.  Now is a good time to start updating your resume if you haven’t and you are even thinking about heading down an upgrade path.

Consider spending as little as $50 a month with a company like CloudShare to get a testing environment.  They have a great pre-production hosting option that will allow you to validate your scenarios without having to invest a ton of capital to do it.

Keep an eye on this, the story has now changed and then changed back since RTM.