This is the second in a shorts series of helpful hits for editing using Word 2013.  You can find the first in the series Enabling the “Mark Comment Done” here.

When I first started with the copyedit review of my book I used to go into the Review tab for each chapter and select to show All Markup each time.  This repetitive stress injury inducing activity was not only annoying, but it was counter productive as it made it difficult to understand the full context of the changes that were being proposed.

Happily I stumbled upon a feature that was previously unknown to me.  It is possible that this has been a part of Word in previous versions, but as I have not had to review documents in such a massive way until the book, I hadn’t ever bothered to look into the Markup features.

The feature that I am referring to is the inline show/hide side bar. 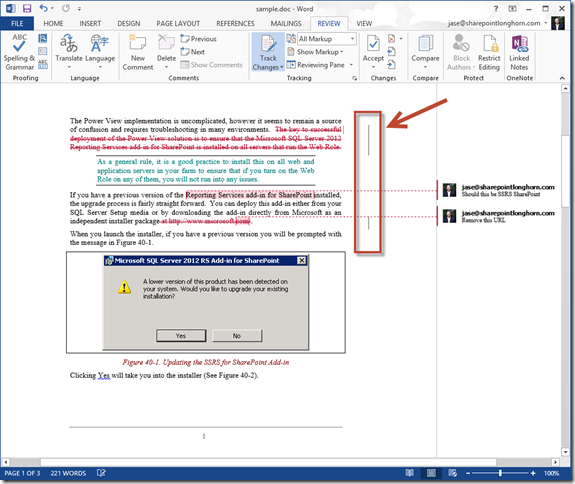 This side bar is grey when All Markup is being show and red when Simple Markup is employed.  To toggle between the two simply click on the side bar. 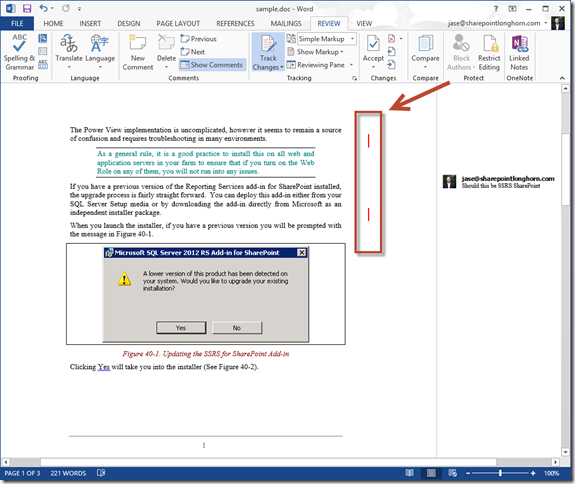 This will allow you to quickly and easily see what changes are being made and what the output will look like without having to hit the toolbar, which is optimal when you are in a touch enabled environment such as a Surface or other tablet.

I found this feature to be invaluable when working on edits and reviews for the book.  Since no one had pointed it out to me before, I figured it was worth sharing.